skip to main | skip to sidebar

Working Process - From the Sketchbook 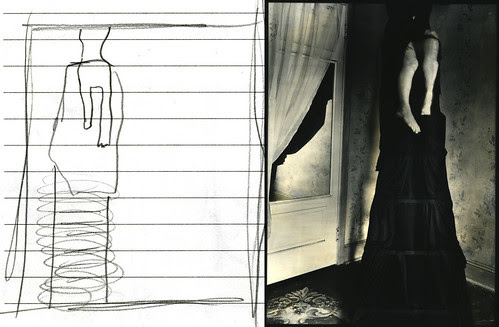 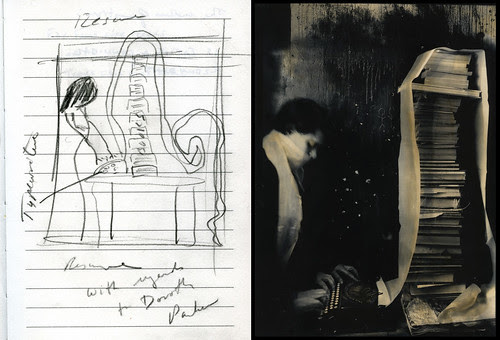 Posted by lauren-rabbit at 8:48 PM No comments: 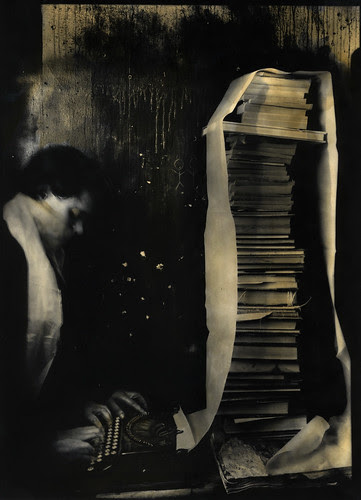 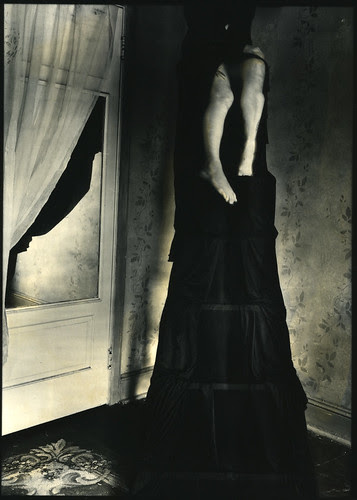 Posted by lauren-rabbit at 10:59 PM No comments:

A lonely 'Drowning' made her own Page

(Being unaware of the gender of books I made an educated guess.)
www.facebook.com/pages/Drowning-not-waving-artist-book/180694568690942
Posted by lauren-rabbit at 8:01 PM No comments:

“The idea of a house built so that people could become lost in it is perhaps more unusual than that of a man with a bull’s head, but both ideas go well together and the image of the labyrinth fits with the image of the Minotaur. It is equally fitting that in the center of a monstrous house there be a monstrous inhabitant.” –Borges 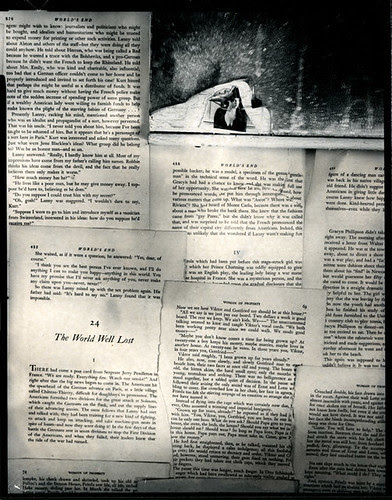 A house, to which one expects to return but does not, becomes a relic.

I stepped out of the door one day for what I expected would be a moment and did not return for weeks. Never did return intact. The impetus for this absence is a fascinating, devastating, poignant and decidedly tragic story, which I will not relate here.
You can, however, see it in the walls.

It isn’t much of a house. It is a delicate wreck of a house. And I was rebuilding it. I built a number of rooms very quickly. Beautiful rooms, hopeful rooms, not just patch and plaster but exceptional rooms-painted gardens, a ceiling spiral of stars, book pages covering the walls. Other walls aged, layer over layer of paint and crackling, icons visible, etched like hieroglyphics-a rabbit, an eye. Floors worked into a chessboard grid with book pages, illustrated, illuminated, heavily shellacked onto the surface so I could walk across without disturbing them. Neither need nor occasion to turn a page.

Upon my return I looked at my home as if it belonged to a stranger. I live a solitary existence so the things I had left, as I had left them, were all that remained to speak for me. Casually misplaced, awry, askew and adrift, arranged, displayed, collected.
Collecting dust.

I do not remember having put it all together, though I know I had done. So I decided to let the rooms have their say. Memory of who I once was. Parts of the best parts of me.

The house, my home, mirrors me. Tragedy in reverse.
It had fallen apart before I found it.
I am falling it back together.
Posted by lauren-rabbit at 9:56 PM No comments:

And so it ends

The set has been struck. 'Spirit photograph: Departure' 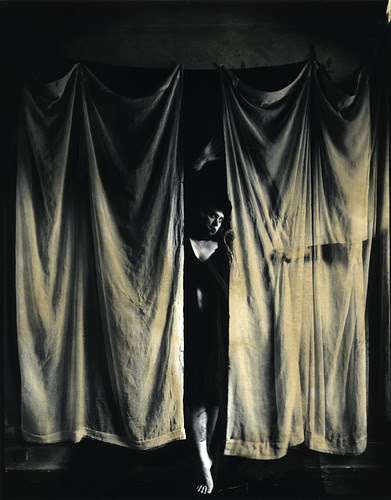 The truth about mirrors 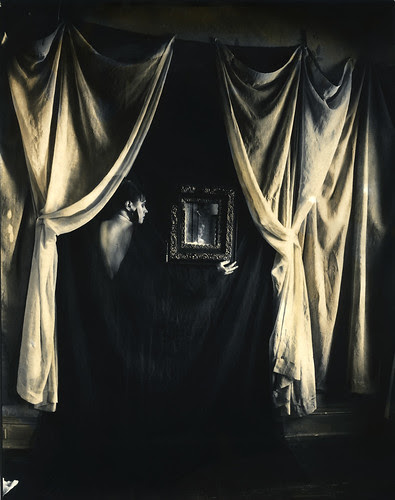 Working with mirrors is more a matter of luck than anything else. This one was a gift-first try. But I cannot count how many negatives I have shot over the years that have me, posing dramatically in gown or straight jacket, next to a mirror majestically reflecting a light socket or bit of ceiling fan.
Posted by lauren-rabbit at 6:39 PM No comments: 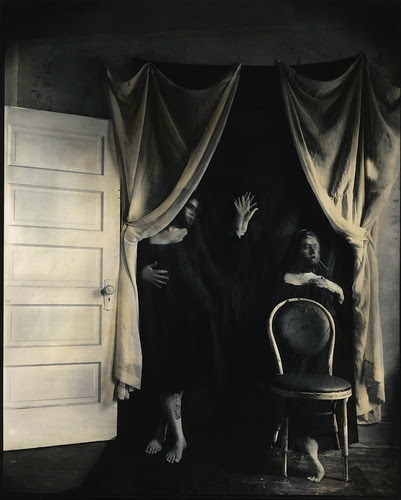 There is a book 'The Perfect Medium: Photography and theOccult' with a tremendous selection of spirit photographs. (Best one, Mary Todd in widows weeds with the ghost of her beloved Abe Lincoln). They are absurd but people believed them because there was the perception of photography as truth, and they had faith. So do I, in my own way, which is why I spent yesterday pushing all the furniture in the green room into the hall and made a theater. Today I set the stage. 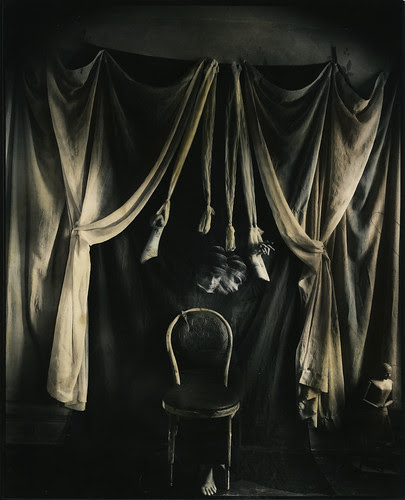 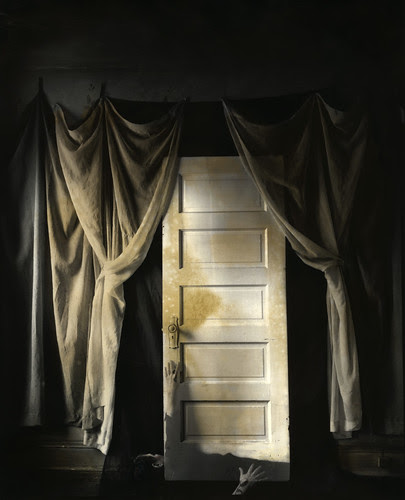 Time out of joint 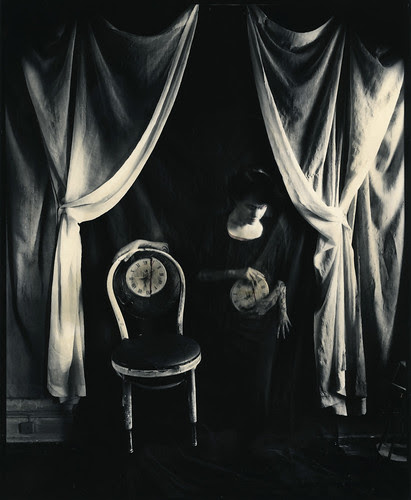 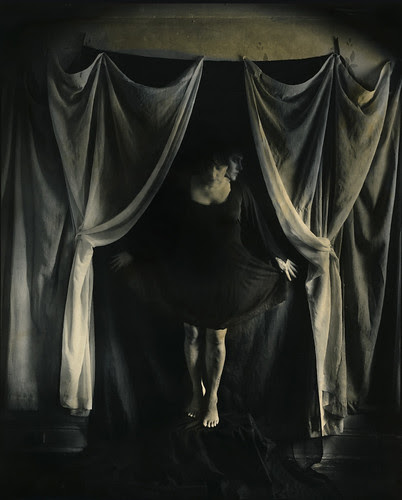 lauren-rabbit
Baltimore, Maryland, United States
The misfirings of my beloved/despised mind that conspire to convince me to destroy all have rendered me housebound and led to a solitary life. I am a creature of past, proof, memory and imaginary friends.